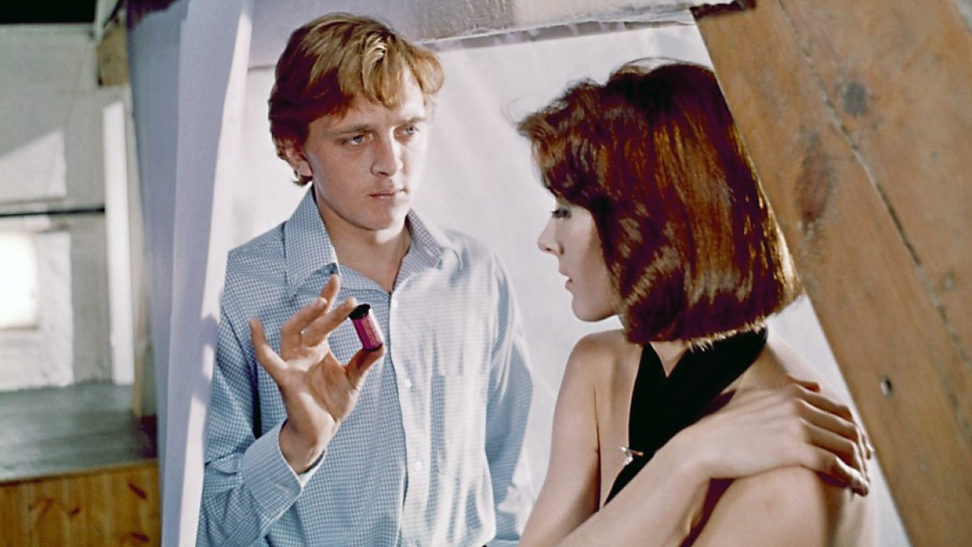 Manly Footwear: This was the first film on our list that I have seen multiple times, and I can’t say quite why, since I have never sought it out until now. Directed by Michael Antonioni in 1966, Blowup features a parade of 60’s mod cons, stylish camera work, a darting narrative that MacGuffins everything in its path, and Vanessa Redgrave, but I just don’t particularly like it, probably because the main character–who dominates every scene–is a complete asshole.

Certainly, I’ve found reason to watch, again and again, other movies about terrible people (Raging Bull, off the top of my head, is #24 on our list), so what about Thomas, the fashion photographer, is so off-putting? I understand that in part the movie is meant as a commentary on a shallow world inhabited by shallow people, and that such a world is, more and more, coming to define even our private lives. And I get to see Jeff Beck smash a guitar, and I actually dig the idea that there is a body, and murder, and oh well, forget about it–as Roger Ebert wrote, Blowup is “a hypnotic conjuring act, in which a character is awakened briefly from a deep sleep of bored alienation and then drifts away again.” I understand why I should like it, but something about the jittery, Benzedrine and moped energy suffusing the film makes me appreciate that I don’t have to watch it again.

Comfortina Footwear: While this was really a lovely film to look at and parts of the story line were compelling, the distaste I felt for the main character for the entirety of the film overshadowed my ability to enjoy it completely. Boy did I dislike him.

This was part of a “new” type of film and focused on a brilliant, handsome artist who’d lost his way and his joy. He spent most of his days photographing beautiful women in hideous clothing, fending off and sometimes indulging in women throwing themselves at him, and spent nights at men’s shelters taking photographs of the forgotten and downtrodden hoping to have a book where both types of photographs showed the juxtaposition of two very different world.

The film starts with a view of people in white face running amok in the streets banging on drums, performing, and then shaking down the regular people for money – something called The Rag and a common practice for university students in London. They weave in and out of the scenes lending a sense of surrealism that makes the viewer question what’s really happening in the other scenes.

While the photographer’s bread and butter came from fashion photography, he really seemed to loathe women and only wanted to exert power over them whether with the camera, his sex-appeal, or his physical strength.

While roaming with his camera, he chanced upon a couple in the park who piqued his interest and he followed them through the park snapping photos from a distance. An older distinguished man and a young woman being furtively flirty were too much for him to ignore.

What happens next is hard to say. There’s a flurry of activity and then the woman’s running to the photographer and trying to get his film. She pleads and he enjoys refusing and causing her pain.

Throughout the rest of the day it seems as though dark characters (and the lovely Vanessa Redgrave) are trying desperately to get his film and eventually, the pictures he develops and blows up – giving way to the title of the film.

It’s worth watching for the beauty of the shots of the film just be prepared to feel a little shocked and dirty after some of the scenes.

Vinnie from Queens: Here’s a plot summary for Blow-Up at the one hour mark: a professional photographer took some photos of strangers in the park, and one of the strangers later showed up and asked for the negatives. And not much happens after that. It is hard to think of another movie that was so confident about not doing anything. Still, for a film that seems so uninterested in itself, the viewer is left with a lot of unanswered questions.

Yet at the same time, it feels like the movie is a total success in its main ambition, which is to be off-beat. And the film’s lack of urgency has its payoffs. It is a beautiful film. There’s a heart-stopping quality to every shot that involves a character’s eyes. You can just watch it the way you might walk through an art gallery. And the Herbie Hancock soundtrack really helps. The music throughout is a sampling of the sound of the times – the end of the golden age of the jazz greats. The soundtrack, on it’s own, is worth listening to.

Any reaction to this stunning movie probably has to mention the main character. We are familiar with movies that present us with an unsavory lead character, or a character who becomes unsavory, but the trick of the story is that since we are ‘with’ the main character for so long, we identify, and see the character as a hero even as they show themselves to be pretty awful. There are so many examples. The Godfather comes to mind. And Whiplash.

Still, in those stories, this main character either starts out fairly innocent, or is surrounded by people who are way way worse. That helps you identify. Not here. This main character is the worst, from the start. So there’s no period of audience imprinting and his unparalleled douche-baggery just comes across as unparalleled douche-baggery. It is no spoiler to say that the last shot of the film is simply the protagonist alone in a large meadow. The camera pulls back. It really is just him, alone, standing in a large meadow. And credits. We are done. Safe to say that last shot just means he is all alone, which, I mean, richly deserved.