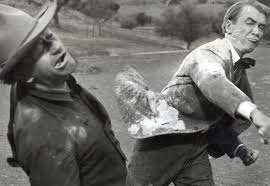 Manly Footwear: I realize this might sounds batty, but this John Ford Western reminded me of Howard Zinn’s book, A People’s History of the United States. It is the story of a the end of one kind of masculine, American archetype, and the rise of another, but also it is about how the latter archetype–the Jimmy Stewart character who believes in the rule of law, and in solving problems through dialog, and an educated populace—uses the labor of the former archetype, the John Wayne, tough as nails, explorer and colonizer of the Old West—to build his own legend.

Here is how it happens: Ranse Stoddard, law school grad, goes West, hoping to civilize folks and help bring the rule of law to a territory that has not yet voted for statehood. He immediately runs afoul of Liberty Valance (Lee Marvin, of course), who is the outlaw that has his way with the town of Shinbone which lies at the edge of the Picket Wire (Purgatoire) River. He later meets Tom Doniphon (Wayne), who is the only man in town who can stand up to Valance, and so helps keep a modest peace. Skipping ahead, Stoddard ends up staggering, shot in the arm, and somehow shooting Valance down in a gunfight near the center of town—except, of course, it was Doniphon, watching from an alley, who actually shoots Valance. Next thing you know, Stoddard is a US Senator, and that is where the movie begins, with Stoddard and his wife returning for Doniphon’s funeral.

It is a remarkably thoughtful, carefully made Western, complex, very much a paean to US history and democracy without being jingoistic at all. And the details are perfect, from the stagecraft–Edith Head won an Oscar for costumes, and all the buildings were ramshackle, falling apart at the slightest touch.–to the cast (Stewart, Wayne, Marvin, Lee Van Cleef, Vera Miles, Strother Martin, even John Carradine in the perfect cameo). Even the names of the characters and the town were carefully chosen. One final detail: the opening scene, of the train arriving, is a set shot. The final scene, of the train departing town after the funeral, is the same set shot, but apparently with a hand held camera, because the frame wobbles. Given the rest of the care Ford took with this film, I can’t but think that was intentional.

Comfortina Footwear: James Stewart, Vera Miles, and John Wayne seem an unlikely love triangle but John Ford made it work. Throw in Lee Marvin as one of the baddest bad guys around and it’s pretty great.

If not for the cruelty of Liberty Valance (Marvin) and the steady, stalwartness of Ransom (Stewart), Hallie (Miles) would have been Tom’s (Wayne) girl and then his wife. Rough around the edges but with a heart 3 sizes too big, Tom’s been sweet on Hallie since he first set eyes on her and would do anything to help her and make her happy. He had started building out his house with an eye towards asking her to marry him when Ransom was carried into town, after a beating by Valance and his thugs.

From the first “Whoa, take ‘er easy there, Pilgrim.” of Tom’s to Ransom to the last scene of them together, where Tom continues pushing for what’s best for the moment, and the future, John Ford shows a recognition and appreciation for a different kind of strength and prowess than what was needed previously in the Wild West. Tom’s overt physical strength and prowess with a gun contrasted to Ransom’s belief in the power of education and the letter of the law.

Liberty’s a villain hired by some ranchers who hope to hold on to the lawlessness of a territory, instead of the institutions of a state, and need some muscle to help “convince” others to see their view. He terrorizes the town and especially sets his sights on Ransom, who he beat and left for dead, only to encounter him later still full of fight.

Tom’s a rancher with a big heart and a steady hand who has the ability to see the path forward may not always be the one you want to travel but one that’s fraught with heartbreak and beauty.

Ransom’s an idealistic and excitable lawyer who believes in the liberation an education can bring and understands sometimes legends have to be enough.

Hallie’s a woman with a rough exterior who longs to learn and see as much as she can during her time on earth.

Together, they form the basis for a tale full of romance, mystery, friendship, and duty that’s not to be missed.