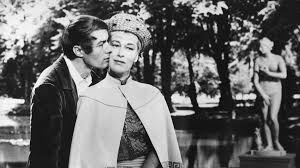 Manly Footwear: There is a light snow falling outside, lovely and gentle the way snow can be, a new President was just inaugurated, the dogs are sleeping, and I’m sitting by the window trying to figure out Gertud. Not that the movie is unintelligible, or even opaque, the way avant-garde films often try to be—the narrative is clear, the camera barely moves, everything is a set piece with people talking. The framing of each scene is remarkably intense, everything is charged and rippling with a cold energy, and people almost never look at one another, looking just past them, or both looking toward, but to the right or left of, the camera, and the sets, too, are staged to amplify the lush, arctic mood. Even the density of the filtering contributes, the film is shot in black and white, but such a rich black and white as to be unsettling, and in the last scene, almost garish.

So it’s not hard to understand what is going on, or why Dreyer, the director, made the choices he did because the whole thing works seamlessly to focus our attention hyper-intensely on the title character, Gertrud, and it is there that the puzzle begins. Not, again, that what she means to communicate to the world is hard to understand: she is devoted to love, a love between, in her case, herself and a man, and the various men she has tried to be in love with are most of the other characters, but all have failed because none of them measure up to the standard she has set. This standard is the puzzling part, she believes that only a perfect, pure, totally obsessive love is worth having, one in which both lovers devote every ounce of attention and energy to one another, and that only such a love makes life worth living. She wants a mythical love, in the sense love that transcends time, and perhaps in the sense that it is unattainable.

At one point, I turned to Comfortina and said something along the lines of, “I can’t tell if she is correct or batshit crazy,” and that tension held throughout the film. It could be seen as a feminist critique, as Gertrud gave up a career as a singer to marry a government minister, and hence is supposed to put her art aside “for love,” a thing men are pretty much never asked to do, and in response, she demands that this love for which she has given her life must be utterly perfect and all-encompassing. Yet, she had a relationship with a different man prior to marrying the politician, and another while she was married, and demanded the same kind of love from each, and of course, both failed. It could be a critique of the idea of purity, since no one will measure up, and she ends up alone, but that seems too philosophical. I think both critiques are present, really, and several others as well, and teasing them apart defeats the enigmatic purpose of her character’s example, which might sound like a surrender, but I will keep thinking about her, and the film, and the fact that I can turn it around and see different facets each time means, for me, it is a brilliant work that both encourages and resists interpretation.

Comfortina Footwear: is this the face of a über committed feminist or that or a crazed perfectionist with a flawed view of love? I still can’t decide.

Gertrude’s husband is angling for a better political post as she tries to work out how best to leave him. Seems she’s fallen for an artist, a young pianist who reminds her of her youth and her own artistic endeavors she left behind. Gertrude makes a series of decisions about and has expectations of her young love that she feels are reasonable based on the love they share that he finds unnecessarily restrictive.

The fallout from that misunderstanding leads to an old love of Gertrude’s returning, followed by the back story of how she came to be with her politician husband. It also allows her to make her exit from her marriage and to explore life on her own.

The life she leads after her departure is alluded to through an end of life conversation with an old friend who visits her hermitage to collect the letters he’s sent her through the years. One can only wonder what scandals are detailed in the letters as he puts the bunch in the fire before taking his leave.

The film is shot with, what I found to be, jarring camera angles, strange interactions among the cast, and a great deal of moving from one odd, uncomfortable seating arrangement to another, often in the middle of conversations. While some of it was definitely designed to support the content of the conversations, it felt overwhelming by the end.